Hormonal responses to food (cephalic responses) are proactive physiological processes, that allow animals to prepare for food ingestion by modulating their hormonal levels in response to food cues. This process is important for digesting food, metabolizing nutrients, and maintaining glucose levels within homeostasis. In this systematic review, we summarize the evidence from animal and human research on cephalic responses. Thirty-six animal and fifty-three human studies were included. The majority (88 %) of studies demonstrated that hormonal levels are changed in response to cues previously associated with food intakes, such as feeding time, smell, and sight of food. Most evidence comes from studies on insulin, ghrelin, pancreatic polypeptide, glucagon, and c-peptide. Moreover, impaired cephalic responses were found in disorders related to metabolism and food intakes such as diabetes, pancreatic insufficiency, obesity, and eating disorders, which opens discussions about the etiological mechanisms of these disorders as well as on potential therapeutic opportunities.

The presence and absence of hormones that are released into the bloodstream generate specific digestive responses; they either stimulate or discontinue digestive processes.

In hormone control, a negative feedback mechanism takes place when the stomach is empty and its acidic environment does not need to be maintained; as a result, a hormone is released to stop the release of hydrochloric acid, which was previously activated to aid digestion.

In some cases, hormones work in tandem and sequentially to achieve important digestive functions, such as in the breakdown of acidic chyme, where hormones act in releasing the appropriate secretions in the appropriate stages of digestion.

When digesting certain types of foods, such as ones high in fat, hormones can control the speed of food digestion and, therefore, absorption.

The endocrine system controls the response of the various glands in the body and the release of hormones at the appropriate times. The endocrine system’s effects are slow to initiate but prolonged in their response, lasting from a few hours up to weeks. The system is made of a series of glands that produce chemicals called hormones. These hormones are chemical mediators released from endocrine tissue into the bloodstream where they travel to the target tissue and generate a response.

You Can Also Like   Stomach Cramping; Causes, Symptoms, Diagnosis, Treatment

One of the important factors under hormonal control is the stomach acid environment. During the gastric phase, the hormone gastrin is secreted by G cells in the stomach in response to the presence of proteins. Gastrin stimulates the release of stomach acid, or hydrochloric acid (HCl), which aids in the digestion of the majority of proteins. However, when the stomach is emptied, the acidic environment need not be maintained and a hormone called somatostatin stops the release of hydrochloric acid. This is controlled by a negative feedback mechanism.

In the duodenum, digestive secretions from the liver, pancreas, and gallbladder play an important role in digesting chyme during the intestinal phase. In order to neutralize the acidic chyme, a hormone called secretin stimulates the pancreas to produce an alkaline bicarbonate solution and deliver it to the duodenum. Secretin acts in tandem with another hormone called cholecystokinin (CCK). Not only does CCK stimulate the pancreas to produce the requisite pancreatic juices, it also stimulates the gallbladder to release bile into the duodenum.

Digestive endocrine system: Hormones, such as secretin and cholecystokinin, play important roles in digestive processes. These hormones are released from endocrine tissue to generate specific controls in the digestion of chyme. As seen in the image, hormones are vital players in several bodily functions and processes.

Another level of hormonal control occurs in response to the composition of food. Foods high in lipids (fatty foods) take a long time to digest. A hormone called gastric inhibitory peptide is secreted by the small intestine to slow down the peristaltic movements of the intestine to allow fatty foods more time to be digested and absorbed.

Understanding the hormonal control of the digestive system is an important area of ongoing research. Scientists are exploring the role of each hormone in the digestive process and developing ways to target these hormones. Advances could lead to knowledge that may help to battle the obesity epidemic.

All three phases of digestive responses to food (the cephalic, gastric, and intestinal stages) are managed through enzymatic neural control.

The cephalic phase is controlled by sight, sense, and smell, which trigger neural responses, including salivation and hydrochloric acid production, before food has even reached the mouth.

Once food reaches the stomach, gastric acids and enzymes process the ingested materials in the gastric phase, which involves local, hormonal, and neural responses.

The intestinal phase controls the rate of gastric emptying and the release of hormones needed to digest chyme in the small intestine.

You Can Also Like   Hay Fever Treatment, Diagnosis, Prevention

In reaction to the smell, sight, or thought of food, the first hormonal response is that of salivation. The salivary glands secrete more saliva in response to the stimulus presented by food in preparation for digestion. Simultaneously, the stomach begins to produce hydrochloric acid to digest the food. Recall that the peristaltic movements of the esophagus and other organs of the digestive tract are under the control of the brain. The brain prepares these muscles for movement as well. When the stomach is full, the part of the brain that detects satiety signals fullness. There are three overlapping phases of gastric control: the cephalic phase, the gastric phase, and the intestinal phase. Each requires many enzymes and is under neural control as well.

Salivation: Seeing a plate of food triggers the secretion of saliva in the mouth and the production of hydrochloric acid in the stomach.

The response to food begins even before food enters the mouth. The first phase of ingestion, called the cephalic phase, is controlled by the neural response to the stimulus provided by food. All aspects, such as sight, sense, and smell, trigger the neural responses resulting in salivation and secretion of gastric juices. The gastric and salivary secretion in the cephalic phase can also take place at the thought of food. Right now, if you think about a piece of chocolate or a crispy potato chip, the increase in salivation is a cephalic phase response to the thought. The central nervous system prepares the stomach to receive food.

The gastric phase begins once the food arrives in the stomach. It builds on the stimulation provided during the cephalic phase. Gastric acids and enzymes process the ingested materials. The gastric phase is stimulated by (1) distension of the stomach, (2) a decrease in the pH of the gastric contents, and (3) the presence of undigested material. This phase consists of local, hormonal, and neural responses. These responses stimulate secretions and powerful contractions.

The intestinal phase begins when chyme enters the small intestine, triggering digestive secretions. This phase controls the rate of gastric emptying. In addition to gastric emptying, when chyme enters the small intestine, it triggers other hormonal and neural events that coordinate the activities of the intestinal tract, pancreas, liver, and gallbladder.

Animals use energy for metabolism, obtaining that energy from the breakdown of food through the process of cellular respiration.

Animals obtain energy from the food they consume, using that energy to maintain body temperature and perform other metabolic functions.

Glucose, found in the food animals eat, is broken down during the process of cellular respiration into an energy source called ATP.

When excess ATP and glucose are present, the liver converts them into a molecule called glycogen, which is stored for later use.

The primary source of energy for animals is carbohydrates, primarily glucose: the body’s fuel. The digestible carbohydrates in an animal’s diet are converted to glucose molecules and into energy through a series of catabolic chemical reactions.

Adenosine triphosphate, or ATP, is the primary energy currency in cells. ATP stores energy in phosphate ester bonds, releasing energy when the phosphodiester bonds are broken: ATP is converted to ADP and a phosphate group. ATP is produced by the oxidative reactions in the cytoplasm and mitochondrion of the cell, where carbohydrates, proteins, and fats undergo a series of metabolic reactions collectively called cellular respiration. 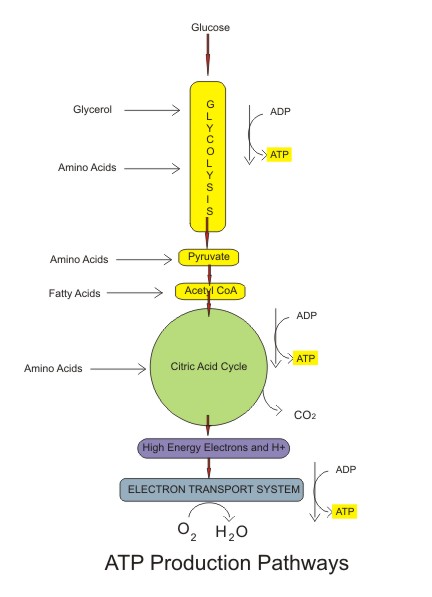 ATP production pathways: ATP is the energy molecule of the cell. It is produced through various pathways during the cellular respiration process, with each making different amounts of energy.

ATP is required for all cellular functions. It is used to build the organic molecules that are required for cells and tissues. It also provides energy for muscle contraction and for the transmission of electrical signals in the nervous system. When the amount of ATP available is in excess of the body’s requirements, the liver uses the excess ATP and excess glucose to produce molecules called glycogen (a polymeric form of glucose) that is stored in the liver and skeletal muscle cells. When blood sugar drops, the liver releases glucose from stores of glycogen. Skeletal muscle converts glycogen to glucose during intense exercise. The process of converting glucose and excess ATP to glycogen and the storage of excess energy is an evolutionarily important step in helping animals deal with mobility, food shortages, and famine.

Sleep; Sleeping Tips, How Way Can i sleep Better Tonight

What Are the Early Warning Symptoms of UTI

When Should I See a Doctor For Hay Fever