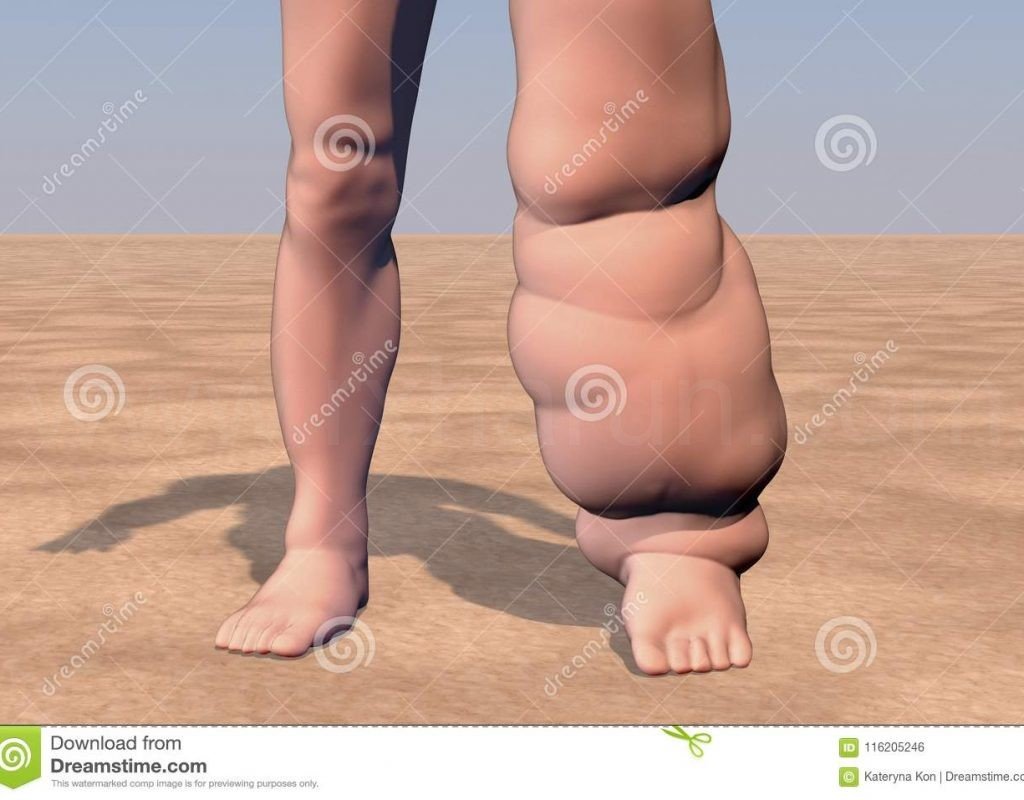 Filariasis Symptoms/Filariasis is a parasitic disease caused by an infection with roundworms of the Filarioidea type.[rx] These are spread by blood-feeding Diptera as black flies and mosquitoes. This disease belongs to the group of diseases called helminthiases. Filarial Disease, or the general term “filariasis,” may also refer to a group of parasitic diseases caused by various species of filarial worms (nematodes). These include mumu, loiasis (Calabar swellings), dirofilariasis (human infection by dog heartworm), and onchocerciasis (river blindness)

Lymphatic filariasis (LF) is a vector-borne disease of the tropical and subtropical countries due to infection by filarial worms, which invade the lymphatics of humans initiating pathological changes leading to later filarial disease manifestations. As a result of its heritable nature, much more is known about the molecular basis of primary lymphoedema (LE) in comparison with what is known about the etiology and pathophysiology of secondary LE – caused by trauma, environmental factors (e.g. podoconiosis) or infection. The single largest source of secondary LE is lymphatic filariasis (LF), a disease caused by filarial nematodes [rx]. 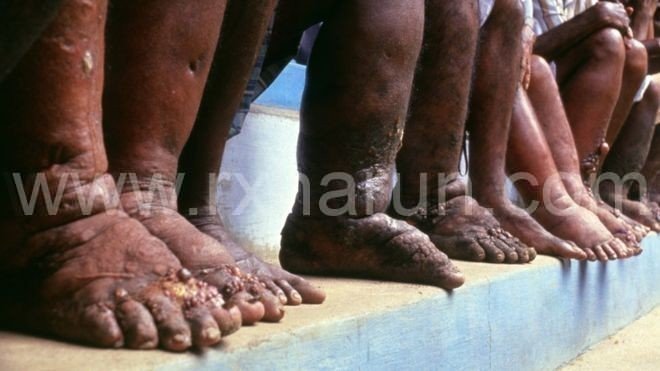 Eight known filarial nematodes use humans as their definitive hosts. These are divided into three groups according to the niche they occupy in the body

The adult worms, which usually stay in one tissue, release early larval forms known as microfilariae into the host’s bloodstream. These circulating microfilariae can be taken up with a blood meal by the arthropod vector; in the vector, they develop into infective larvae that can be transmitted to a new host.

The Transmission Cycle of Filariae 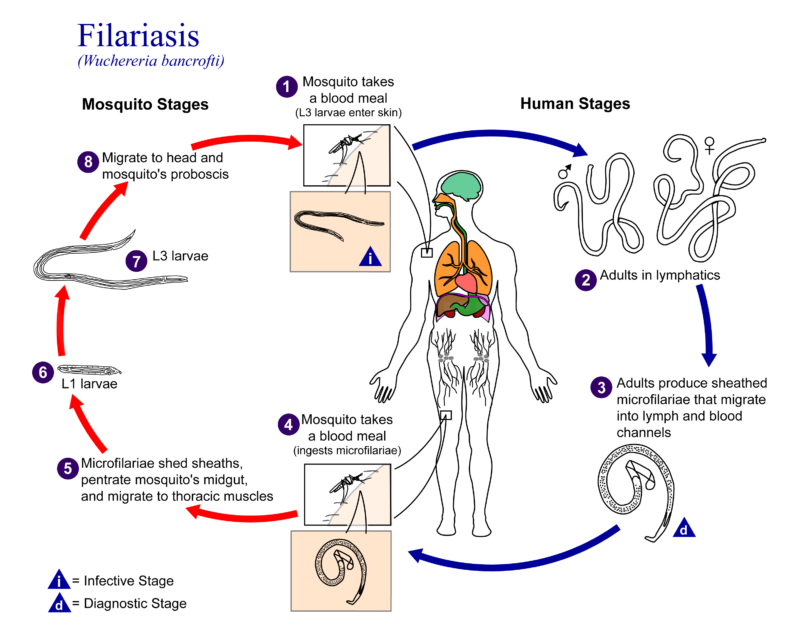 Lymphatic filariasis is caused by infection with parasites classified as nematodes (roundworms) of the family Filariodidea. There are 3 types of these thread-like filarial worms:

You Can Also Like   What happens to your body when you have a stroke?early Sign
Powered by Inline Related Posts

Lymphatic filariasis can manifest itself in a variety of clinical and subclinical conditions. Traditionally, it has been accepted that people living in an endemic area can be classified into five groups

Lymphedema of extremities is a common chronic manifestation of LF, which on progression results in elephantiasis. Usually, the lower limbs are involved, either unilaterally or sometimes bilaterally in which case, the swelling tends to be asymmetrical. The upper limbs, male genitalia and rare breasts in the females may also be affected. The lymphedema of the limbs is commonly graded as follows [rx]

In advanced stages of lymphedema, the skin is thickened and thrown into folds, often with hypertrichosis, black pigmentation, nodules, warty growth, intertrigo in the webs of toes or chronic non-healing ulcers [rx]. The swelling may be so huge and grotesque that the patient is incapacitated requiring help even for personal needs. Fungal infections in the interdigital region and in deep folds are a common finding in advanced lymphedema.

Manifestations can be protean and classified as

The diagnosis of filariasis requires examination of a blood smear for the presence of the larval roundworm W. bancrofti or B. malayi. Since the number of parasites (parasitemia) in the blood is higher during the night, blood samples are best obtained at night. When parasites are not found in the blood, the adult worms may occasionally be found in a lymph node sample from an infected individual.

The following treatment modalities offer relief and help to prevent further progression of the swelling:

WHO Recommends the Following MDA Regimens

Recent evidence indicates that the combination of all three medicines can safely clear almost all microfilariae from the blood of infected people within a few weeks, as opposed to years using the routine two-medicine combination.

WHO now recommends the following MDA regimen in countries without onchocerciasis:

Lymphatic Filariasis as a unique and successful program

To prevent lymphedema from getting worse, patients should ask their physician for a referral to a lymphedema therapist so they can be informed about some basic principles of care such as hygiene, elevation, exercises, skin and wound care, and wearing appropriate shoes.

You should also take the time to destroy mosquito breeding habitats in your home and community by following these steps, especially in the lead up to and during the summer wet season;

Symptoms of the following disorders can be similar to those of Filariasis. Comparisons may be useful for a differential diagnosis: 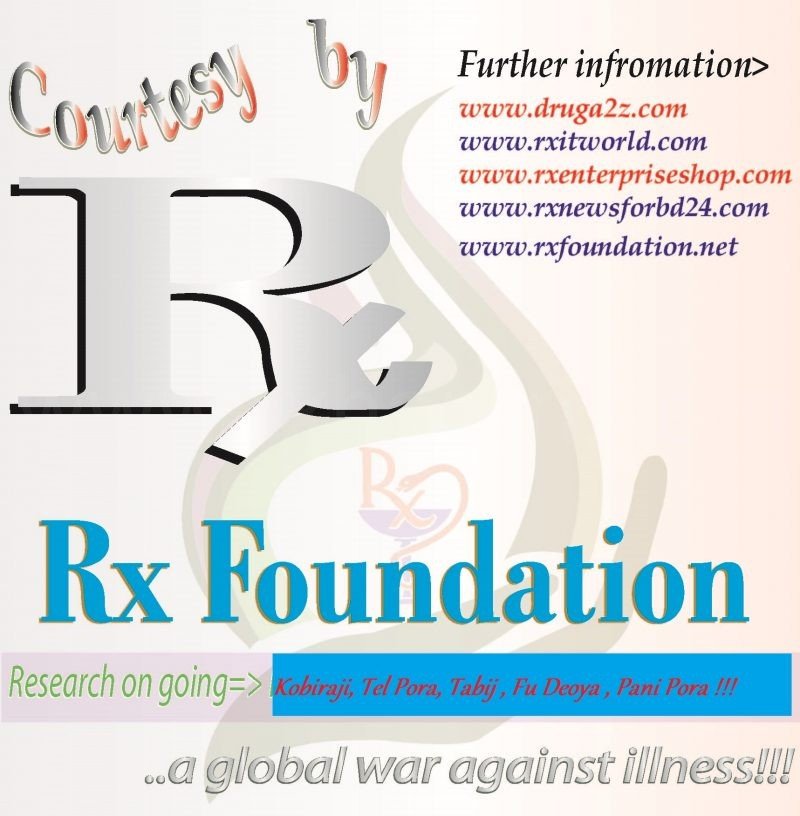